Title: To Be Perfectly Honest: A Novel Based on an Untrue Story

Her friends
have a joke about her:
How can you tell if Colette is lying?

Her mouth is open.

Fifteen-year-old Colette is addicted to lying. Her shrink says this is because she’s got a very bad case of Daughter-of-a-famous-movie-star Disorder—so she lies to escape out from under her mother’s massive shadow. But Colette doesn’t see it that way. She says she lies because it’s the most fun she can have with her clothes on. Not that she’s had that much fun with her clothes off. At least not yet, anyway…

When her mother drags her away from Hollywood to spend the entire summer on location in a boring little town in the middle of nowhere, Colette is less than thrilled. But then she meets a sexy biker named Connor. He’s older, gorgeous, funny, and totally into her. So what if she lies to him about her age, and about who her mother is? I mean, she has to keep her mother’s identity a secret from him. If he finds out who she really is, he’ll forget all about Colette, and start panting and drooling and asking her for her mother’s autograph. Just like everyone always does.

Thank you to the publisher for sending me a copy of this! I don’t know what might change in the final version of print, but this review is based off the uncorrected proof copy.

Now, the first big thing about this book is the layout. It looks like a bunch of poems but reads as one book. It seems like it would be hard to read but after a few pages of reading I forgot about it and just plowed through. Since the pages are like this, it also reads really fast, I felt it was more like a 200 some page book instead of over 400. There also aren’t any chapter breaks, but I was actually fine with that too. 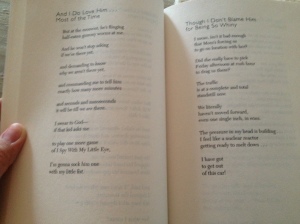 This is what the pages look like. I kind of thought it was cool.

The story itself is pretty good, I liked the idea of a girl who tells nothing but lies (well she tells some truths, but lying is so natural to her). I didn’t dislike her character but I didn’t love it either, it’s kind of an in-between thing for me. I think her little brother Will was the best though. His positive attitude and love for her was so cute. He has a lisp too which was hard to read at first as well but you get used to it.

I don’t what to ruin anything involving the story, but it was really a cute read. I liked how her lies get her into trouble, so she starts to learn to tell the truth a bit as it goes on. The ending was also perfect for this story. If you see this on a shelf soon, definitely give it a look!

2 comments on “Review: To Be Perfectly Honest by Sonya Sones”