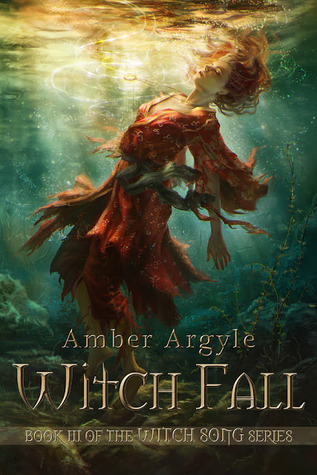 With the magic of their songs, the Witches control the seasons, the storms, even the sea. Secure in their supremacy, they have forgotten the unmatched destructiveness of mankind. For the world has begun to covet their power, seeing them as weapons to be controlled instead of rulers worthy of obeisance.

Born of witches but raised among their enemy, Lilette searches for a way to heal the rift between mankind and the witches. But it may be too late to save either. For if there is one thing Lilette has come to know for certain, it’s that all things fall.

I received  copy of this for a review tour and while the final release version may be different, this is my opinion on the copy I have.

I have to say that I was really excited to get to this one after reading the other books. I wanted to know more about the past and this whole book is devoted to that. It’s a prequel to the series and tells the story of Lilette. If you’ve read the other books you know who she is. Technically you could read this alone, but it really adds to the story if you read the other two books first.

I’m not sure what I was expecting but it was pretty good. Lilette seemed like a good character and I actually kind of liked her better than Sena since she wasn’t as whiny and much more mature. She had so much to deal with such as the deaths of those she loved but she kept fighting every situation that was thrust her way. Lilette couldn’t remember how to do magic and was without it for years before she was around other Witches again. She also forgot some of her past too but she remembers it over time.

There were bits at the beginning of each chapter about Lilette and certain events that took place that chapter by Jolin, who was another Witch. I liked that added insight and it was pretty cool to see her thoughts too. The book also helps us learn about the world a bit more and the structure of the witches back then. If you’ve read book two, you will start to see how certain things started to change for the Wastrels. The ending of the book was really awesome and I couldn’t believe what was happening because of certain people.

I have to say that I actually enjoyed this book a little better than the other two. Don’t get me wrong, they were good, but I just enjoyed Lilette’s story a bit more and her character was so much stronger.

Amber Argyle is the author of Witch Song and Fairy Queen trilogies. She grew up with three brothers on a cattle ranch in the Rocky Mountains. She spent hours riding horses, roaming the mountains, and playing in her family’s creepy barn. This environment fueled her imagination for writing high fantasy. She has worked as a short order cook, janitor, and staff member in a mental institution. All of which has given her great insight into the human condition and has made for some unique characters. She received her bachelor’s degree in English and Physical Education from Utah State University. She currently resides in Utah with her husband and three small children.