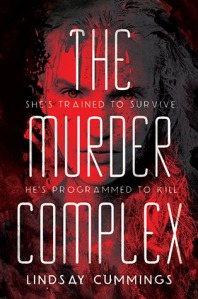 An action-packed, blood-soaked, futuristic debut thriller set in a world where the murder rate is higher than the birthrate. For fans of Moira Young’s Dust Lands series, La Femme Nikita, and the movie Hanna.

Meadow Woodson, a fifteen-year-old girl who has been trained by her father to fight, to kill, and to survive in any situation, lives with her family on a houseboat in Florida. The state is controlled by The Murder Complex, an organization that tracks the population with precision.

The plot starts to thicken when Meadow meets Zephyr James, who is—although he doesn’t know it—one of the MC’s programmed assassins. Is their meeting a coincidence? Destiny? Or part of a terrifying strategy? And will Zephyr keep Meadow from discovering the haunting truth about her family?

Action-packed, blood-soaked, and chilling, this is a dark and compelling debut novel by Lindsay Cummings.

I was approved to read this advanced copy from Edelweiss.

When I first started this I was thinking that it would be the same as other Dystopian books and I wouldn’t like it. As you know I’m getting a bit sick of that genre because so many are the same and revolve around romance instead of the group that controls everything. But I have to say that I really warmed up to this one and I had a lot of fun reading it. If you’re thinking it’s going to be like the Hunger Games because of the murder aspect, you’re definitely wrong. (Hunger Games wasn’t even the first dystopian to pin teens against each other to survive anyway.) It’s different and has it’s own strong story to carry it.

But back to the review. This one does have a lot of death and violence but I didn’t find it gruesome in any way, it just genuinely felt like they were doing it to survive, which they were in the story. And the lack of much gore really helped, since that usually turns me off books. It’s also packed with action and the fight scenes were done pretty well.

The Initiative is the group that controls everything. The world is disease free, but because of that there are so many people that it’s hard to survive, so somehow people end up being murdered in the night. You find out what’s going on with that though, so you’re not left wondering. The corruption and lies and how it all happened was done really well and explained too, and it really drew me into this book.

Meadow was a great character, strong and willing to do anything to survive or keep her family safe. This really drives her, especially later in the book when a bunch of stuff happens. Zephyr was our other character and he seemed like a nice guy, even with certain things happening to him. The book goes back an forth with dual POV, but each chapter tells you who is narrating, which I love. There was a little touch of flirting in the book, but it honestly isn’t a full blown romance as far as I could tell, especially since she wants to kill him a bunch of times. And thankfully no insta-love/lust!

Honestly I really enjoyed this book, and although it’s Dystopian you can’t really compare it to others and judge it. Read it for yourself and see what you think, but I’m definitely continuing this series.

10 comments on “Review: The Murder Complex by Lindsay Cummings”