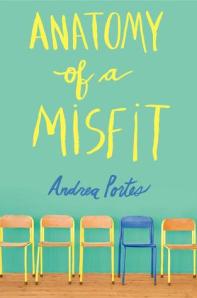 Fall’s buzzed-about, in-house favorite. Outside, Anika Dragomir is all lip gloss and blond hair—the third most popular girl in school. Inside, she’s a freak: a mix of dark thoughts, diabolical plots, and, if local chatter is to be believed, vampire DNA (after all, her father is Romanian). But she keeps it under wraps to maintain her social position. One step out of line and Becky Vilhauer, first most popular girl in school, will make her life hell. So when former loner Logan McDonough shows up one September hotter, smarter, and more mysterious than ever, Anika knows she can’t get involved. It would be insane to throw away her social safety for a nerd. So what if that nerd is now a black-leather-jacket-wearing dreamboat, and his loner status is clearly the result of his troubled home life? Who cares if the right girl could help him with all that, maybe even save him from it? Who needs him when Jared Kline, the bad boy every girl dreams of, is asking her on dates? Who?

Anatomy of a Misfit is Mean Girls meets The Perks of Being a Wallflower, and Anika’s hilariously deadpan delivery will appeal to readers for its honesty and depth. The so-sad-it’s-funny high school setting will pull readers in, but when the story’s dark foreboding gradually takes over, the devastating penultimate tragedy hits like a punch to the gut. Readers will ride the highs and lows alongside funny, flawed Anika—from laughter to tears, and everything in between.

I was accepted to review this from Edelweiss.

If you’re going into this thinking it’s going to be a cute summer romance like a lot of them out there, then you’re definitely wrong. That’s what I thought it was so I was in for a bit of a surprise when I actually started reading it.

It was written with Anika being the narrator and it was fast paced and sometimes very random. It doesn’t really go in depth like other contemporaries and it seems like there’s a lot of little tiny stories of things happening that are woven in (hence the random parts) but that doesn’t make it bad. Sometimes I wished it was a little different, but the main thing I didn’t like was how she spoke. I don’t know how teens speak these days, but she said “like” A LOT and it just kind of bugged me. I know she doesn’t have to be super sophisticated, but it kind of turned me off just a little bit until I got into it.

The story itself was pretty good, although I wish she made better decisions on a lot of things, especially where it concerned Logan. But in a way this book kind of shows how certain things and decisions can affect you after, and the fact that she did learn from it was great. This book also has a lot of laughs which I loved! One particular gym scene had me laughing on the bus and people giving me weird looks. She also has a great sense of humour, and I liked how she tried to help others even though she considers herself a bad person.

The ending was great, even though some crazy stuff happens. If this sounds like something you would enjoy you should for sure read it. The way she speaks might not bother you as much as it did me since I can be picky with these things. In the end I’m really glad that I did read it.

2 comments on “Review: Anatomy of a Misfit by Andrea Portes”